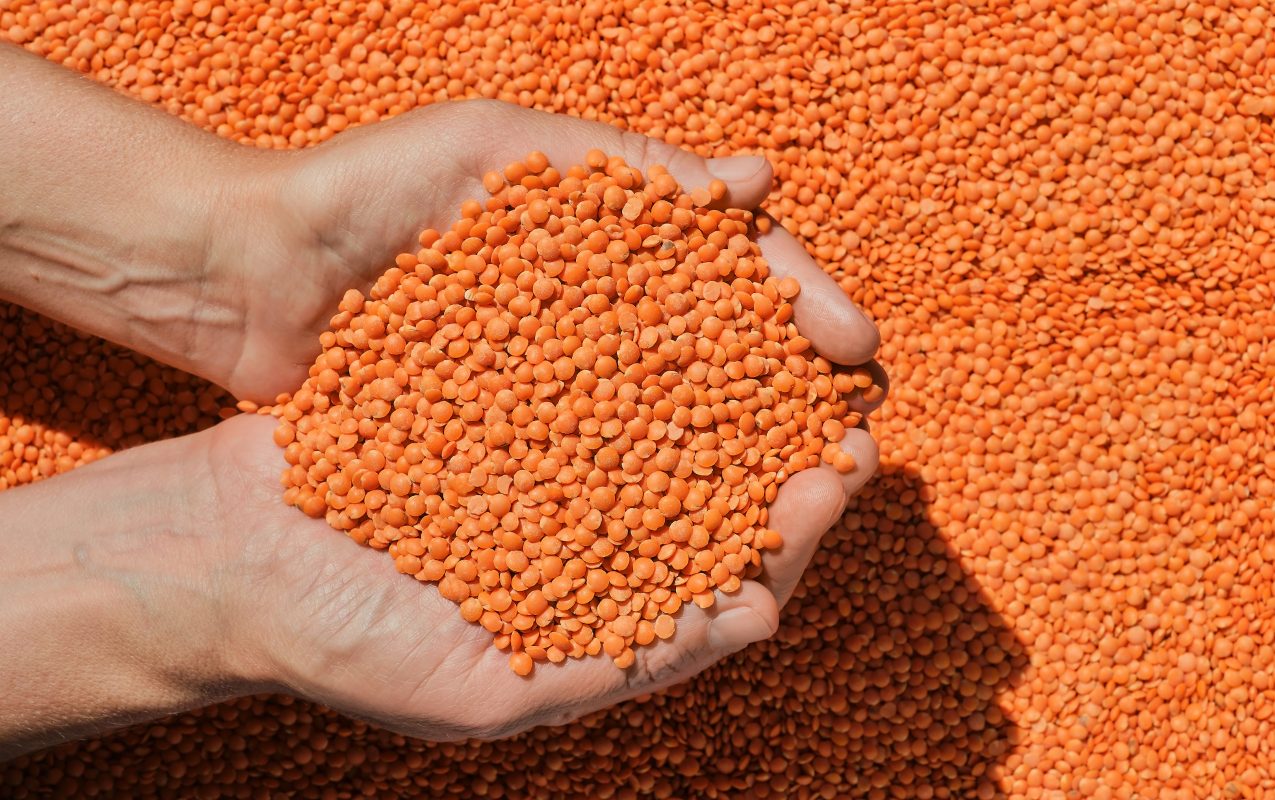 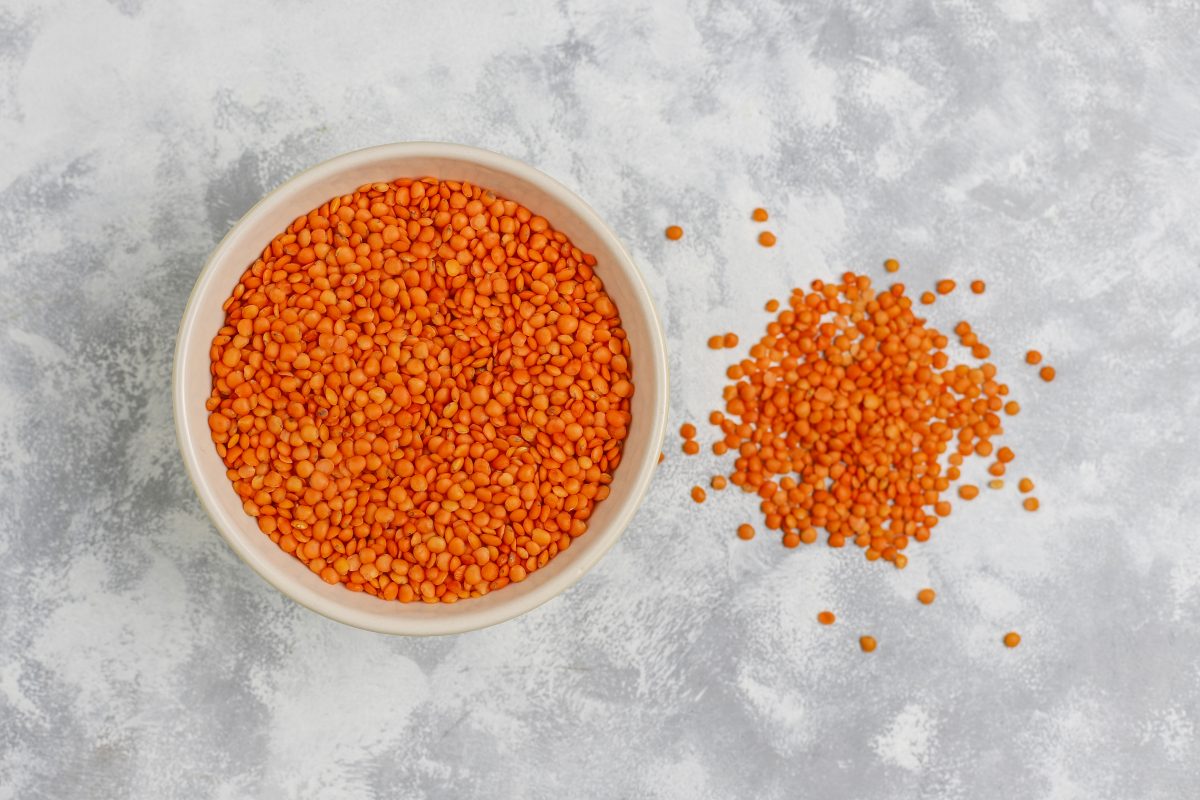 Red lentil is marketed as whole seed, but 90 to 95 per cent of red lentil is dehulled before it is eaten. Dehulled lentil is consumed in whole form (footballs) or in split form. It is most commonly eaten as soup in the Mediterranean region or as dhal – a thick sauce in which spices are used as flavouring in south Asia. It is an important source of dietary protein and carbohydrate.

Red lentil plants are short, ranging from 20 to 65 cm (eight to 26 inches) in height; depending on variety and growing conditions.

The first two nodes on the stem develop below or at the soil surface, and are known as scale nodes. Injury to young lentil seedlings by late spring frost, heat canker or wind damage may cause the plant to regrow from a scale node below the soil surface.

The third node on the stem is the usual site of the first leaf development. Lentil seedlings can produce a new node every four to five days under good growing conditions. Just prior to flowering, new leaves will develop a short tendril at the leaf tip.

Leaves that develop above the fifth or sixth node are about five centimetres (two inches) long with nine to 15 leaflets. Lentil plants have an indeterminate growth habit, so they will continue to flower until there is some form of stress, such as lack of moisture, nutrient deficiency, or high temperature. Flower stalks produce one to three flowers, which develop pods. Flowers are self-pollinated. Pods are less than 2.5 cm (one inch) in length and contain one or two seeds. Most of the seed is produced on branches that form on the middle and lower nodes of the main stem.

Because most red lentil is dehulled before consumption, the suitability of new red lentil varieties for secondary processing such as dehulling and splitting is of utmost importance. Dehulling and splitting yields in some processing plants are higher for thicker seeds which may be more desired for specific markets. Plant breeding goals at the University of Saskatchewan, Crop Development Centre (CDC), for red lentil include the development of well-adapted, high yielding varieties that meet market needs. 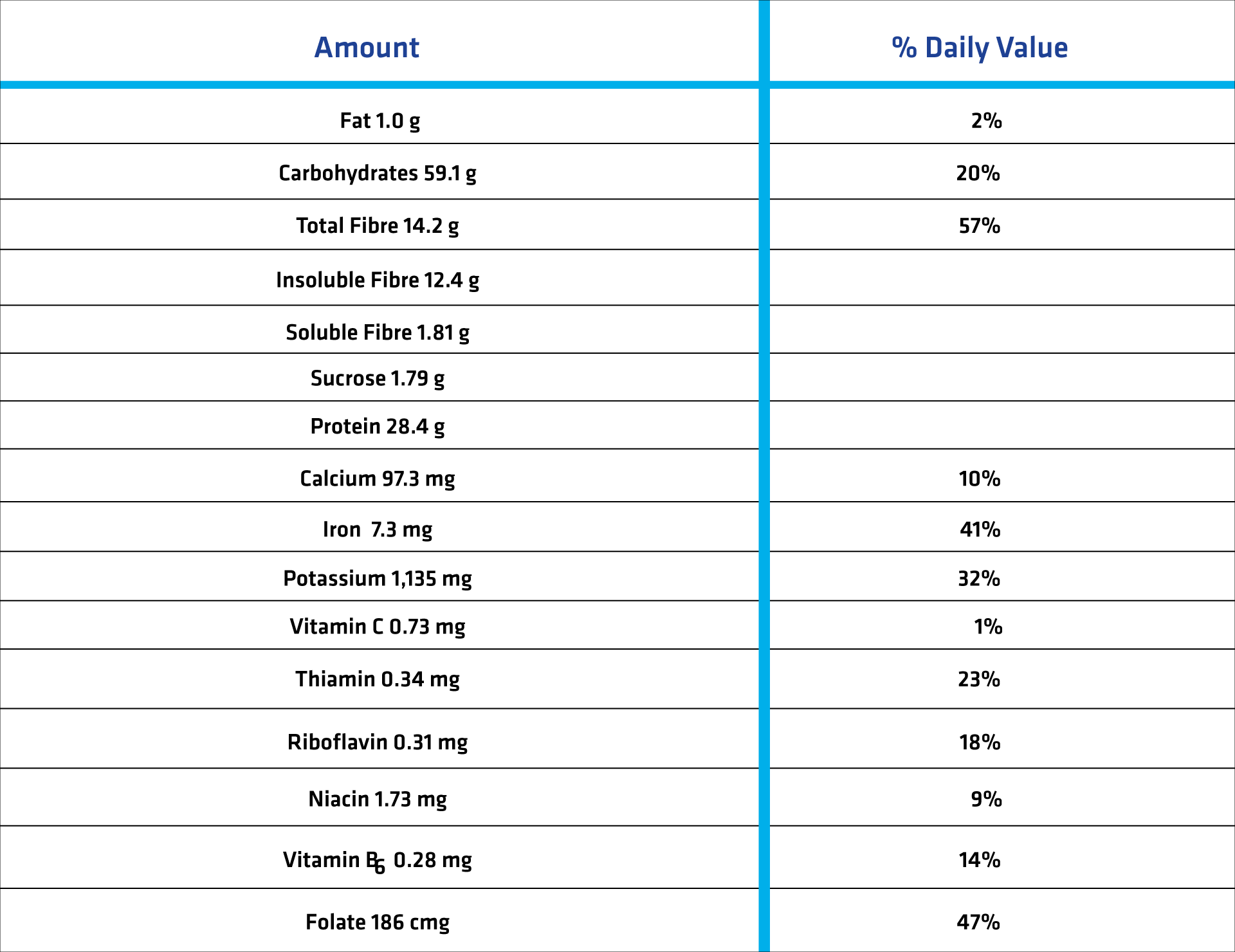 Lentil is a cool-season crop with a relatively shallow root system (0.6 m or 2 ft.) and is moderately resistant to high temperature and drought. Lentil has an indeterminate growth habit, and often will continue to flower as long as growing conditions remain favourable for vegetative growth. Lentil does best in soil with pH levels of 6.0 to 8.0 and will not tolerate water-logging, flooding, or soils with high salinity.

In Saskatchewan, red lentil is best adapted to the Brown and Dark Brown soil zones, but can be grown successfully in the Thin Black soil zone in years without excessive moisture. In the Brown soil zone, performance is best on fallow in medium to fine-textured soils, or on stubble using direct seeding techniques, providing soil moisture reserves are adequate. In the Dark Brown, moist Dark Brown and Thin Black soil zones, red lentil grown on stubble tends to receive the stress needed to reduce the time to maturity, prevent excessive vegetative growth and reduce the risk of damage from early fall frost. There is opportunity to expand red and small green lentil production into the moist Dark Brown and Thin Black soil zones. The more determinate red and small green varieties are better suited to the cooler, moist-lentil growing areas of the province and areas with heavy clay soils. Research is ongoing to determine the best varieties and agronomic practices for lentil production in these areas.

Mixing red and green lentil during the growing season or during handling and storage causes significant downgrading of the crop. Experienced lentil growers refrain from growing red and green lentil in rotation in the same field to avoid class contamination from volunteer plants, and designate fields for one colour only. This is especially true of red and small green classes, which are impossible to separate during cleaning.

Red lentil production is most successful when grown in rotation with cereals. Crop rotation research conducted by Agriculture and Agri-Food Canada (AAFC), Swift Current, shows yields of cereal crops grown on stubble were best following lentil or pea crops. Lentil rooting depth was found to be about 0.6 m (2 ft.). This allows the following wheat crop, with a rooting depth to 1.8 m (6 ft.), to extract water from a greater depth and produce higher yield and protein.

Red lentil is susceptible to ascochyta blight and anthracnose, and careful consideration must be given to crop rotation to reduce the risk of these diseases. Ascochyta blight is a chronic problem; avoid lentil production more frequently than one in four years in the same field, especially in areas where anthracnose is a problem, and avoid seeding lentil in fields adjacent to lentil stubble, as anthracnose is easily transferred on wind-blown dust and residue. Lentil seedling diseases, such as root rots and seedling blights, are more common in fields where pulse crops have been grown more frequently. Anthracnose can be a major cause of root rot in lentil. Red lentil is also susceptible to Anthracnose root rot.

Sclerotinia stem rot may be a problem if lentil follows other susceptible broadleaf crops, such as canola, sunflower, mustard or pea. Volunteer flax, canola, or mustard may be difficult to control in lentil. Volunteer cereals, such as barley or durum wheat, are difficult to clean from red lentil seed and should be controlled in the field.

Red lentil is a very poor competitor to weeds, so selection of a mostly weed-free field is essential, as few in-crop herbicides are registered for use. Clearfield varieties may provide a better opportunity to control weeds unless Group 2 resistant weeds are present. Perennial weeds, such as Canada thistle and sow thistle, should be controlled in the years prior to lentil production. Red lentil is susceptible to the soil residues of some herbicides used in previous years. It is important to maintain herbicide records each year and to avoid seeding lentil in fields treated with residual herbicides. Red lentil is also susceptible to aphanomyces root rot.

Refer to the Guide to Crop Protection, which contains more information about herbicides and their soil residual properties.

Red lentil varieties have brown, grey, tan or pale green seed coats with red cotyledons. CDC Impact and CDC Imperial were the first two Clearfield® lentil varieties released in Canada. Clearfield varieties may mature earlier compared to other varieties because the plants may not be injured when treated with herbicide.

Seed coat colour has some influence on red lentil quality, particularly the ability to withstand weathering in years with prolonged periods of wet weather at maturity. Under those conditions, varieties with grey seed coats show less weathering damage.

The use of high-quality seed is extremely important for successful red lentil production. It is important to have seed tested by a seed-testing laboratory for germination, purity and seed-borne disease. Seed-borne diseases, such as ascochyta blight and botrytis, can reduce seedling vigour and lead to yield and quality losses.

Lentil seed is susceptible to mechanical damage during harvest, handling or seeding operations. Dry seed (less than 12 per cent moisture) is brittle and can crack or chip, leading to reduced germination.

Firm, weed-free seedbeds on well-drained soils are best for red lentil production. Stony fields should be avoided or rolled after seeding to bury loose stones and smooth soil ridges to prevent problems at harvest. The recommended seeding depth for lentil is three to eight cm (one to three in.) The desired plant population for lentil is 130/m² (12/ft.²). Crop stands of this density provide better competition against weeds and will result in higher yields. Crop stands of greater density may increase the risk of foliar diseases, especially in wetter areas. Wider row spacing can be used in high-moisture regions to reduce the risk of a thick crop canopy leading to poor pod set, foliar disease development, and lodging.

The optimum seeding rate for each seed lot depends on its seed size. For example, CDC Impact has an average seed size of 34 g/1,000 seeds. The following formula should be used to determine the intended target seeding rate for individual seed lots.

Seeding should begin when the average soil temperature at depth of seeding is greater than 5 C and the soil is not excessively wet. Lentil seedlings can withstand some late spring frost. Even if the frost is severe enough to kill the main shoot, the lentil plant can re-grow from one of the scale nodes at or below the soil surface. Early seeding can help avoid flower blast caused by high temperatures during flowering and improve the chance to harvest in August when the seed moisture content is at or below 13 per cent. Early seeding may also increase the height and size of the plant at time of first bloom, allowing the lowermost pods to develop farther above ground to ease harvest.

The average yield of red lentil in Saskatchewan is approximately 1,905 to 2,129 kg/ha (1,700 – 1,900 lb./ac.). Pick-up reels, lifter guards, floating or flexible headers, and air reels can be added to harvest equipment to ease the handling of short-statured, tangled or lodged crops. Fields that were land rolled are easier to harvest, as the swather or combine cutterbar must be operated very close to the ground. A slower ground speed may also be required when harvesting red lentil due to their short plant height.

Swathing should occur when about 30 per cent of the lowermost pods turn tan, and their seeds rattle. Shattering may be reduced by swathing under conditions of higher humidity. Lentil swaths are prone to wind damage.

Lentil can be straight-cut using a combine equipped with a flex header, or with a pick-up reel and vine lifters when seeds and pods are fully mature, or after desiccation. Excessively dry seed will chip and peel during threshing. It is preferable to thresh at about 14 to 16 per cent moisture and use aeration to dry the sample to 13 per cent for safe storage. The red lentil splitting industry prefers product at moisture content levels below 13 per cent to improve the efficiency in their splitting plant. Check with your red lentil buyer for specific seed moisture content requirements.

Low cylinder or rotor speeds are required to reduce seed chipping and breaking during combining. Cylinder speeds of 250 to 500 RPM are normally used, depending on cylinder diameter and moisture content of the lentil seeds. Combine augers and grain augers should be operated at low speeds to reduce seed damage.

Red lentil seed that is mixed with green weed seeds and other high-moisture materials should be cleaned as soon as possible to prevent heating. Moisture levels up to 13 per cent and temperatures below 15 C are considered safe for red lentil. The use of aeration fans to reduce moisture and temperature will improve storage. If supplemental heat drying is necessary, air temperatures should not exceed 45 C to preserve germination, and the sample should not be dried more than four to five percentage points per pass through the dryer.

Red lentil should be stored in dry, dark conditions. Seed from successive years should not be mixed, as the oldest seed will cause a downgrading of the entire sample. Mixing varieties and lots from different years may also affect milling quality.

Seed is susceptible to increased chipping and peeling if handled in temperatures colder than -20 C. For more information on storing, handling and grading of lentil, consult the Saskatchewan Pulse Grower’s Pulse Production Manual.